“As a huge Austen fan, I enjoyed this book and thinks it gives proper homage to a classic.” – Palmer’s Picks for Reading 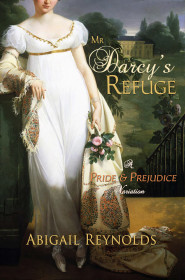 Trapped for three days by a flood, and trapped forever by society because of it….

It is a proverbial dark and stormy night when Mr. Darcy proposes to Elizabeth Bennet in the most insulting manner. Just as she begins her famous refusal, a crack of thunder presages the pounding at the door as the residents of the flooded village of Hunsford seek refuge from the storm at the parsonage atop the hill. Even worse, the flood has washed out the only bridge leading to Rosings Park, leaving Darcy stranded with Elizabeth at the parsonage. The river isn’t the only thing that overflows in Hunsford when Darcy and Elizabeth are forced to work together to deal with the crisis under the worst possible circumstances. And it may already be too late to redeem Elizabeth’s reputation….

In this Pride & Prejudice variation, the lane dividing the Hunsford parsonage from Rosings Park has been replaced by one of the flood-prone Kentish rivers. The storms are real – the spring of 1811 was remarkable for numerous thunderstorms in Southeast England.