“I would highly recommend this to anyone who likes romance novels or just wants a happy ending.” – Steph the Bookworm 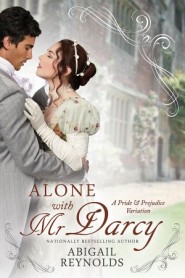 At long last, Alone with Mr. Darcy is finally available! Here’s the blurb:

Elizabeth Bennet can’t imagine anything worse than being stranded by a blizzard in a tiny cottage with proud and unpleasant Mr. Darcy. But being trapped there for days – and nights – with an injured and confused Mr. Darcy who keeps saying the oddest things about her, is even worse. At least he possesses the useful ability of lighting a fire to keep them from freezing to death. But when he puts his arms around her, she discovers the hearth isn’t the only place he knows how to build a fire. And the little half-frozen kitten he finds in a woodpile isn’t proving to be much of a chaperone.

She doesn’t really believe his promises to marry her if anyone finds out they spent two nights alone together, especially after learning he was betrayed by another woman in the past. When her worst fears are realized and her reputation is in tatters, she isn’t surprised to discover Mr. Darcy has vanished into thin air, leaving her no choice but to find a husband as soon as possible before her whole family is ruined. Any husband, no matter how much she dislikes him. Even if she can’t stop thinking of Mr. Darcy….

And yes, for those of you who follow me on Facebook, the little half-frozen kitten is based on Snowdrop, though she goes by Snowball in the book. One time when I was stuck writing the book, readers suggested putting Snowdrop in the story, and lo and behold, I realized it would solve all my problems. I have the best readers in the world!

For those of you wanting to know the nitty gritty details of Alone with Mr. Darcy, here are answers to some of the usual suspect questions: In case you missed it when I posted an excerpt, you can read the first three chapters here.

It usually takes less than a day after one of my books is released before readers start asking about the next one, so here’s the scoop. I’m about 10,000 words into a fun new Pemberley Variation where Elizabeth and Darcy become caught up in the events of the Luddite revolt. I’m also gearing up to start a new project I’m very, very excited about in collaboration with the talented Monica Fairview. It was one of those midnight crazy ideas that my Muse just won’t let go of. I can’t give you the details yet, but it’s going to be a completely new kind of Pride & Prejudice variation, and I’m just chomping at the bit to start writing it!

Here are links for buying this book:

Alone with Mr. Darcy on Kindle

Alone with Mr. Darcy on Nook

Alone with Mr. Darcy in paperback

Alone with Mr. Darcy on Kobo

And don’t forget to stop by my launch post on Austen Variations which has all the same information, but also a fantastic giveaway including antique Regency jewelry (the jewels are paste, but it’s genuine Regency) and various Jane Austen items.