“I would recommend Mr. Fitzwilliam Darcy for anyone who loves Pride and Prejudice and can’t get enough of these characters.” – PopSyndicate.com

So, about that book I said would be out in April…

Well, it’s May. Best laid plans, and all that. When I released Mr. Darcy’s Enchantment in November, I thought I needed about a month to finish my new book set in Scotland. Instead, I’m still putting the finishing touches on it. It needs a few transitions, an addition to the epilogue, and some cutting before I send it off to my editors, but it’s pretty close to finished.

What happened? I got caught in the writing doldrums, spinning in circles, writing and rewriting and re-rewriting one section of the book. Then I had to change other parts to make them match, and then I did it again and again, and getting nowhere because none of it satisfied me. Eventually I was ready to call it quits on the whole book because I couldn’t get that one section to work, but fortunately, my amazing critique group refused to let me. They insisted I had to finish the book because they wanted to read the end! 🙂

I’m embarrassed to admit a big part of the problem has been my own expectations. My last two books, Conceit & Concealment and Mr. Darcy’s Enchantment, were a hard act to follow. I’m particularly proud of them, and many readers have told me they’re the best things I’ve written. That’s all great, but, rightly or wrongly, I’m feeling rather intimidated about publishing another book that may not live up to those expectations. I’m trying not to listen to those doubting voices in my head, but sometimes I need a gag for my mental editor! 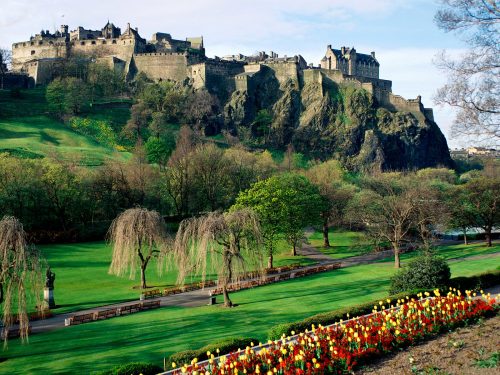 What can I tell you about the new book? It’s set in Scotland, part in elegant Edinburgh and part in the mysterious Highlands. The theatre plays a large role, as the main characters struggle with defining their roles in their own lives. The working title is A Matter of Honor, though I sometimes jokingly refer to it as Harps & Highwaymen. Any suggestions? About half of my titles were suggested by readers, because you’re usually better at it than I am.

I’ll start posting chapters soon, but here’s a little excerpt to whet your appetite. In this segment, Darcy has a broken leg. Mrs. Graham is Elizabeth’s Scottish chaperone.

Mrs. Graham excused herself after an informal dinner in the drawing room, leaving Darcy alone with Elizabeth for the first time that day. Elizabeth had been particularly attentive to him at dinner, perhaps trying to distract him from the pain in his leg which was nothing to the ache in his heart. But the laudanum-laced wine had relaxed him enough that he could drink in the lively expressions that crossed Elizabeth’s face and the way her hair shone in the candlelight without too much thought of the future, as if intimate dinners with her were something that could be a natural part of his life.

Now Elizabeth walked past him toward the bookcase, the slight sway of her hips almost hidden by her woolen dress, the curve of her neck outlined by the moonlight from the window. A surge of desire nearly overset Darcy, the longing to run his hand along that silver-lit skin so strong that he had to fight to keep himself on his chaise longue, broken leg be damned. In that moment, being lame forever seemed a small price to pay for being able to touch Elizabeth, to feel the silk of her skin, the little shiver she would give at his touch.

Then she turned and met his gaze, and he knew he was not alone in his desire. She wanted him, too. There was hunger and yearning in her fine eyes, and, as they stared at one another in silence, a hint of despair.

She bit her lip and shook herself, as if waking from a reverie, and looked away. She picked a book from the shelf at random, clutched it tightly, and hurried back to her seat by the fire, never looking his way.

The ache in his chest was like a burning coal he could not ignore. “Elizabeth,” he said softly.

She hesitated before raising her head. “Yes?” Her voice was weighted with resignation.

“You cannot deny what is between us. Surely there must be some way we can work together to overcome whatever stands in our way.” He did not know why she might answer differently this time, but he could not remain silent.

Her hands tightened into fists. “Do you think I have not spent hours and wracked my brains trying to answer that question? But there is no answer. And trying to pretend otherwise only makes it worse.” Her voice caught. “Perhaps you have never before been denied something you wanted desperately, but there are very few in this world who have that privilege.”

His face burned at her reproof. “I have been fortunate, but I have faced adversity. It is not stubbornness but the strength of my sentiments which will not be denied.” Even as the words left his mouth, he knew it was the wrong way to approach her.

As she looked at him, her pain evident in the lines of her face, she opened her mouth to say something, but apparently changed her mind. Instead, she rose to her feet and hurried from the room, her skirts swishing around her.

“Elizabeth!” he called after her, but there was no response, just the sound of her feet on the steps.

Devil take it! She knew how much he hated it when she walked away in anger and he could not follow her, could not do anything but wait for her to return. If she did return. He pounded his fist on the arm of the chaise longue, wincing at the pain as the movement jostled his leg. Damn it! Why could she not have stayed and talked to him?

He heard footsteps outside the door, but it was Mrs. Graham’s quick footsteps, not the soft sound of Elizabeth’s slippers. The older woman hesitated in the doorway, looking back in the direction Elizabeth had gone, and then turned to Darcy with an exasperated expression. “I cannot leave the two of you alone for even a few minutes!”.

“It is nothing,” he said automatically. Another reproof was the last thing he needed.

“From what I saw of Lizzy’s face, it did not look like nothing,” she said tartly. “I will give you one piece of advice, whether you like it or not. When a lass says no, you must take her at her word. Show her that much respect.”

“I have the greatest of respect for her,” he said stiffly. But he had not shown it. She had begged him not to press her, and he had not listened. What a fool he had been! 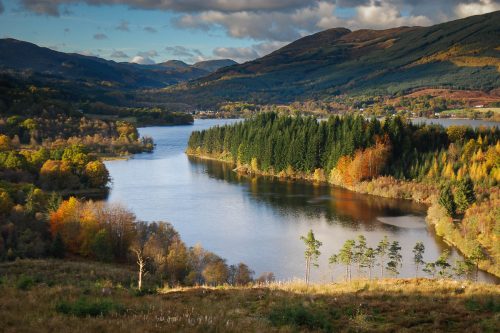 Loch Ard, where part of the book takes place

What do you think? Words of encouragement for my ailing muse? Any clever title ideas? 🙂