“For anyone who loves, Jane Austen and Pride and Prejudice, this book is a must have.” – Book Girl of Mur-Y-Castell

Uh, oh. Now I’m in trouble! You can throw rotten fruit, but no death threats, okay? 😉

I like writing happy books. But last summer I posted something on Facebook about how much I’d enjoyed writing variations where Mr. Darcy had a brother, and suddenly an evil plot bunny sprung full-grown into life right in front of me. It was such a high-angst idea that I could barely manage to look it in the eye, much less think about writing it, but that scary little plot bunny sunk its teeth into me and wouldn’t let go. I’ve been working on it ever since, though I have to say I didn’t pick a good time to decide to write an angsty story! But I’m about 3/4 of the way through it now, and it’s time to share my dark secret with you.

Now, pray keep in mind that I have an absolute, unbreakable rule: Darcy and Elizabeth have to end up together and happy, so I give you that guarantee. I’ll even add in that I don’t kill anyone off, and everybody ends up happy unless they’re named Wickham, in which case they get what they deserve. And, boy, does he ever deserve it this time! 😉 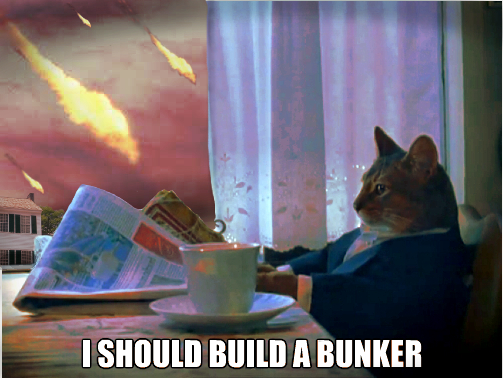 So, with that reassurance, I’m going to show you my scary, terrible, horrible, no good, very bad plot bunny, and then you can throw things at me. Except I’ll be hiding in my bunker, just like I did when I wrote my other angsty book, Mr. Fitzwilliam Darcy: The Last Man in the World.

Why, I hear you ask, would you want to read about my angsty scenario when the world is angst-filled enough already? Well, if you make it through and leave a comment without any death threats directed to me (rotten vegetables permitted), I’ll add your name to my list for potential beta readers and ARC readers for this story, and you can be the first to read the story. I only have a certain number of slots, though, so if there are too many, I’ll pick randomly.

Here is an excerpt from the first chapter so that you can see what I’m struggling with. It takes place the night Darcy returns to Pemberley, the day before the rest of his party arrives, but there was no miraculous meeting with Elizabeth on the grounds.

Home. He was home, but it was all wrong. Elizabeth was supposed to be with him, lighting the darkness with her smiles, bringing laughter back to Pemberley, the sort of laughter he remembered from his childhood. But all that joy had ebbed away as he grew up and all the arguments over Drew had poisoned the atmosphere. Then his mother’s death, and his father’s long illness had completed the process. He had thought Elizabeth’s fine, sparkling eyes could banish the joyless emptiness, that her wit and warmth could rekindle love and happiness at Pemberley. And then she had refused him. Bitterly, angrily, and leaving him no room for hope.

The butler appeared at the study door. “Mr. Andrew Darcy is here to see you,” said Hobbes.

Darcy straightened. Drew was actually here, at Pemberley, and seeking him out? Wonders never ceased. Perhaps something good had come of all of this after all, and at least he would have regained one person he had lost. “Show him in.”

Hobbes hesitated. In that slight, almost imperceptible shift of tone the old butler used for matters he deemed significant, he said, “Mr. Andrew is in the drawing room.”

Darcy glanced around the study. Why did Hobbes want Darcy to see Drew in the more formal setting of the drawing room rather than here? Was something wrong? But Hobbes had known Drew through all those years when Darcy had been off at school and university, so perhaps he was aware of something.

Darcy rose to his feet. “Very well; I will see him there.”

Was that a flicker of relief in the butler’s faded eyes? “Very good, sir.”

As Darcy passed between heavy carved doors of the study, the reason suddenly struck him. It had been his father’s study, of course, and the place that gentleman had always delivered tongue lashings and occasional canings to the children of the house. Darcy recalled all too well a few unpleasant visits there, but Drew, who had always been in trouble for one thing or another, must have many bad memories of it. Yes, much better to meet elsewhere.

And Hobbes had realized it, when Darcy had not. Elizabeth had been right when she accused him of a selfish disdain for the feelings of others.

But he was determined to change, and Drew’s presence here was proof of it. Elizabeth’s refusal had led to his decision to reach out to Drew once more, to offer him the living in Kympton, and to tolerate patiently – or at least with the external appearance of patience – as Drew warily examined his generous offer for potential traps. Elizabeth had taught him that much; he could not assume anyone would trust his motives just because he wished them to do so. His patience had paid off; Drew had, in the end, accepted the living, and now he was back at Pemberley where he belonged.

And there was Drew, standing on the far side of the drawing room, studying a small watercolor on the wall.

Drew started and spun around to face him. “Yes. She appears to have a good eye for the picturesque,” he said stiffly. Always stiffly. Would Drew never trust him? But that would take time, and more patience.

“She does, although she only sees the faults in her paintings.” No. He needed to be warm and approachable. “Welcome. I am glad to see you. Some wine, perhaps?”

Drew’s lips tightened. What had Darcy done wrong now? “No, I thank you, and I will not take up much of your time. I am sorry to trouble you when you have only just arrived.”

“Not at all. I am very pleased to see you. How have you found the parsonage at Kympton? Is it in satisfactory condition?”

Drew plucked at his cuffs, looking uncomfortable. “Yes, very satisfactory, and I thank you again for granting me the living there.”

“You have done me a favor in taking it. I am relieved to have it in reliable hands.”

He plunged on, as if nervous. “But I would not have troubled you on your first night at home, had I not something in particular to tell you, and I wanted you to hear this news from me rather than from someone else.”

Oh, no. That sounded ominous. What sort of trouble had Drew got himself into now? Whatever it was, Darcy had to remain calm. “What sort of news?”

Drew took a deep breath. “I am engaged to be married.”

“Engaged? My congratulations! That is excellent news.” At least he knew how to respond properly to this, even if the thought of Drew being married came as shock. Or perhaps it merely brought home his own failure to become engaged. Elizabeth should be sitting beside him as his wife, and instead he was alone, while Drew was engaged. “May I ask who the fortunate lady is?” Not that he had any particular worries in that regard. When he had made inquiries about Drew’s recent behavior before offering him the living, there had been nothing about petticoat chasing.

“Actually,” Drew said slowly, “I believe you are acquainted with her. Her name is Miss Bennet. Miss Elizabeth Bennet.”

The world froze as the words echoed inside his head. No. It could not be. This was some horrible joke. Or perhaps he had heard wrong. “Miss Elizabeth Bennet of Longbourn?” Astonishingly, his voice still worked.

“The very one.” Drew watched him steadily.

It could not be. Drew, engaged to Elizabeth? Darcy had known that someday she would marry another man, but not so soon. And not Drew! God help him, not Drew. Darcy would have to witness them together again and again, to know she was in Drew’s arms, that she was bearing Drew’s children, not his… He drew in a harsh breath, fighting the urge to clutch at his stomach, to scream at Drew that it was impossible.

But if he raised his voice to Drew, or even criticized him, he would never see his brother again. It had taken all these years to reach the point where Drew would converse with him, much less step over the threshold of Pemberley. He could not lose him now.

And how could he blame Drew for loving Elizabeth, when he himself found her so utterly irresistible? But Elizabeth did not want him. She wanted Drew. Blood pounded in his ears.

Finally Darcy managed to say, “I was unaware she was acquainted with you.”

Drew shrugged. “She never mentioned you to me, either, until after I proposed to her.”

Elizabeth had accepted Drew. Agreed to marry him, after telling Darcy he was the last man in the world she could be prevailed upon to marry. But she had chosen to become Drew’s wife. His chest grew painfully tight. Would he ever be able to draw a full breath again?

He had to say something, all the proper things, even if his world was breaking into tiny pieces. “You are fortunate man. I wish you both happy. When is the wedding?”

“We have not yet set a date. This was only settled two days ago. You are among the first to know.” Drew raised an eyebrow and said deliberately, “Miss Bennet feared you might object to the connection, but I told her I did not need your permission to marry.”

Darcy swallowed hard. Of course he objected. Objecting did not begin to describe his feelings about it. But he said, “I cannot think why. She is a gentleman’s daughter, and thus perfectly suitable.” How could laughing, teasing, witty Elizabeth possibly marry stern, angry Drew? Oh, yes, he objected, and with every bone of his body. But he could never, ever say so.

Drew actually smiled. “Good. I am glad of that.”

Darcy could not imagine ever feeling glad again.

But there was one thing he had to know, one more bit of salt to pour on the jagged open wound in his heart. “I seem to recall hearing her portion was small. Is this a love match, then?”

The lines on Drew’s forehead smoothed. “Yes,” he said quietly. “I love her.”

Well? What do you think? Screams of protest? Rotten vegetables? I’ll be in my bunker under Pemberley!