“A story to make any reader who ever loved Darcy love him even more.” – The Apprentice Writer

Today I’m delighted to be taking part in Austen’s Birthday Soiree, a multi-blog extravaganza organized by Maria Grazia of My Jane Austen Book Club and Katherine Cox of  November’s Autumn.  The best part is that you can get presents, even though it isn’t your birthday, because each blog is also hosting a giveaway.  I’ll be giving away a copy of Mr. Darcy’s Undoing to a lucky commenter.

Meantime, each blogger gets to give a virtual birthday present to Jane Austen herself.  My choice was obvious because I’d just done far more research than was necessary (as is usually the case for me) to be able to describe a very specific gift Darcy was to give Elizabeth in Mr. Darcy’s Letter.  I can see some readers scratching their heads trying to remember a present from Darcy in Mr. Darcy’s Letter – you might as well give up, since it ended up being cut from the final draft, despite the three days of research I’d put into it.  It was a lap desk, a wooden box that opens to reveal a fabric or leather sloping surface for writing on, with compartments for bottles of ink and a shallow groove to store pens.  Underneath the writing slope was a storage area for papers – just right for love letters.   Many also had secret compartments for valuables.  In Mr. Darcy’s Letter, the gift was of significance because Darcy had received two letters from Elizabeth (the second was cut from the final version) and wanted her to write more, but knew she had difficulty finding privacy at Longbourn to write a secret missive.  The gift of a lap desk was a tongue-in-cheek reference to their past secret correspondence, but also practical and decorative – and it could be locked to keep private letters away from snooping sisters. 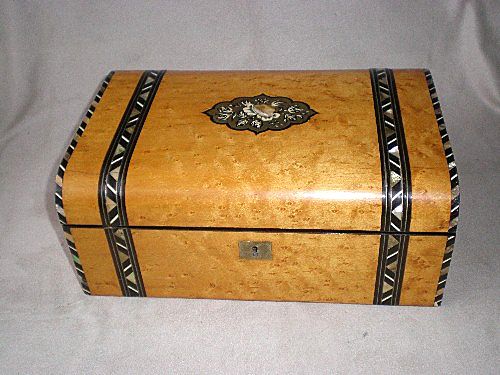 What better birthday gift could I give Jane Austen than tools to make her writing easier?  This one is made of birdseye maple with mother-of-pearl insets. The interior, like that of many lap desks of the period, is a lovely rosewood, and it comes complete with a key.  Jane can take it anywhere to write – under a tree as well as in her sitting room.  Maybe she’ll write even more now! 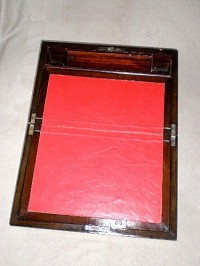 If you’re interested, you can see more views of this lap desk here.  It’s even for sale, and if I ever win the lottery, it’s on the top of my to-buy list.

I’m also celebrating my newest release, Mr. Darcy’s Letter, with a giveaway of a signed copy at Austen Authors, and I’ve posted my short story “Intermezzo” as a free bonus for my readers.  Don’t forget to comment here (including email address) by December 23 if you’d like to win the signed copy of Mr. Darcy’s Undoing!

Laurel Ann Nattress ~ Austenprose
Jane Austen Made Me Do It