“I would recommend Mr. Fitzwilliam Darcy for anyone who loves Pride and Prejudice and can’t get enough of these characters.” – PopSyndicate.com

Want to a sneak peek of my new novella? It’s getting towards the finish line, though it’s looking more like a short novel than a novella at the moment. It’s a low-angst, high-banter look at what Darcy might have been like if his parents had still been alive when he met Elizabeth. If he hadn’t taken on responsibility for Pemberley and Georgiana at age 22, how would he have filled his days with no responsibilities? Would he have become one of the young men about Town, caring only about amusing himself? Or would he find another interest?

My next story has my answer to that question. My Darcy fills his empty days with a passion for paleontology (a word that didn’t exist in 1812, but I’m using it as shorthand). Fossil collecting and natural history were growing in popularity in Regency England, although the famous fossil-hunter Mary Anning was only a pre-teen at the time. Unfortunately for Darcy, fossils could also be controversial in the Regency, since the Church and the government insisted the world was only 6000 years old, and it’s criminal heresy to say otherwise. Darcy’s father wants him to give up his little hobby because of the potential scandal and criminal charges, so he sends him off into the Hertfordshire countryside with his friend Bingley to keep him away from those troublesome Royal Society fellows who only encourage him. Unfortunately for old Mr. Darcy, Elizabeth Bennet has some ideas on this subject….

Here’s a fun excerpt – no angst, no cliffhanger, just Elizabeth and Darcy doing their thing!

By the next day, Elizabeth’s long-standing curiosity had overtaken her reluctance to speak to Mr. Darcy, and she sent a note off to Longbourn. A few hours later, a response came in the form of a somewhat ragged boy carrying a wooden box which he refused to surrender to anyone but Miss Lizzy herself.

“No need to worry, Jacky,” Elizabeth said with amusement. “Pray set it on the table.”

The boy lowered the small chest with more gentleness than his appearance would have suggested.

Elizabeth smiled at him. “Thank you. That will be all.”

Jacky gave her a cheeky grin and sauntered out.

Miss Bingley put her elegant nose in the air, clearly displeased by the presence of such a person in her elegant drawing room. “Something very precious from Longbourn, no doubt.”

“Only to me,” Elizabeth replied. She eased open the lid of the box. “It is nothing but a few fossils I collected as a child. I thought to take the opportunity to ask Mr. Darcy about them. I doubt they are anything special, but I would be curious to know more about them.”

Darcy put his book aside instantly and came to her side, craning his neck to see into the box. Taking the first fossil Elizabeth handed him, he turned it over several times, running his finger over the ridges of it. “An ammonite. Not an uncommon one, but a very fine specimen.”

“I found several others that were similar, but this was the best of them.” She pulled out a round fossil dotted with lines of indentations. “This was another of my prizes.”

He looked this one over more carefully, bringing it close to his eyes, then making a rough measurement with his fingers of the distance between indentations. “An echinus – a sea urchin of sorts. I do not recall seeing one precisely like this, but I will have to compare it to my books.” He reached into the box himself and took out a funnel-shaped fossil. “Where did you find these?”

Elizabeth hid a smile at his lack of restraint. Who would have thought the staid Mr. Darcy would show such eagerness? “At Longbourn. There is an old chalk pit beyond the sheep pasture. My sisters and I played there as children.”

His attention, so firmly fixed on the fossils until now, snapped towards her. “There is a chalk pit at Longbourn, and you did not tell me?” From his tone, one would have thought she had hidden the crown jewels deliberately to spite him.

With a laugh, Elizabeth said, “There are a great many things at Longbourn I have not told you about, sir, and you would find me tedious indeed if I did. Had I known of your fascination with chalk pits, I would certainly have informed you immediately.”

Miss Bingley edged closer to Mr. Darcy. “Miss Eliza, I imagine you have had little experience with such educated gentlemen, or you might have realized its value to a natural scientist.”

Elizabeth pursed her lips. “How right you are, Miss Bingley! I should have known better. Instead of asking Jacky to fetch my box of fossils, I ought to have told him to bring the entire chalk pit.”

This bit of repartee went unnoticed by Mr. Darcy, who had taken the funnel-shaped fossil to the window and raised his quizzing glass to his eye to study it more closely, first from one angle, then another.

“An alcyonite,” he replied absently. “Can you show me the way to this chalk pit, Miss Bennet?”

Bingley said, “Because it is almost dinnertime, and it will be growing dark shortly.”

“I promise you, Mr. Darcy, the chalk pit and any fossils therein will still be there in the morning,” said Elizabeth with a laugh.

Although he had no choice but to accept that answer, he did not let the topic drop, first asking Elizabeth further about what she had found in the chalk pit, and then disappearing into the library with her fossils, with only the briefest of hesitation to ask her permission to do so.

When he did not appear at dinner, Bingley ordered a tray to be sent to him. “Darcy will not emerge until he has solved whatever mystery is puzzling him. For your sake, Miss Elizabeth, I hope it will be soon, since he will not be pleasant company for you tomorrow if he stays up all night with his books.”

Shaking her head, Elizabeth said, “I did not mean to disrupt his plans. I hope I did not annoy him with my questions.”

“Annoy him? Hardly! Darcy is never happier than whether he is poring over the details of some strange fossil, or looking through his pile of books in which each picture looks exactly like the one before it. He loves his studies and despises being idle.”

Miss Bingley, although not seated next to Elizabeth, could not remain out of the conversation. “Mr. Darcy is a scholar, and a very fine one. It is not for the rest of us to understand all that he can see in a simple rock.”

Elizabeth took a sip of her wine. “I promise I will speak to him with all due respect,” she said with mock seriousness.

After dinner, Elizabeth declined the offer to join the others in a game of cards, since she wished to check on Jane. Light spilled out the door of the library as she made her way upstairs. Curious, she could not resist taking a peek inside.

Pencil in hand, Mr. Darcy sat at the large table covered with open books and loose papers, surrounded by several flickering candles and two lamps which together produced more lighting than Elizabeth had ever seen used in one small space at night. One of her fossils sat directly in front of him, and judging by his frown, he found it quite displeasing.

Amused, Elizabeth said, “I hope my fossils are not causing you any distress, sir.”

He looked up, squinting as he tried to make out her figure in the shadows by the door. “Not at all, Miss Elizabeth. It is only my own limitation as a draughtsman that troubles me. I would like to consult one of my colleagues about this, but I have been unable to render it well enough for a drawing to be useful.”

Taking that as an invitation, she crossed the room and leaned over the table. A rough, imperfect outline of the funnel-shaped fossil – what had he called it, an alcyonite? – covered the paper beside him, showing the signs of many rubbed-out lines. He had not been exaggerating; she had seen better drawings done by children. Noticing the lines of fatigue around his eyes, she held out her hand for the pencil. “May I?”

He gave it to her, his countenance revealing nothing as she turned the fossil slightly and corrected several of his lines, adding some shading to show the general shape. “Is that better?”

“Much.” His expression was self-deprecating. “Would you be able to add in the indentations along the edge, or do I ask too much?”

“It is important for their spacing to be an accurate representation if he is to make an appropriate identification.” He sounded like a school master.

Once she had completed the additions, she handed it to him. “I hope this will help.”

“Very much, I thank you. Your assistance is timely. I wish I had your talent for drawing.”

She laughed. “I have no talent for drawing, at least as it is judged as a skill for young ladies. My portraits and landscapes are embarrassing at best. Fortunately for you, the one thing I can manage to reproduce with some degree of competence is a still life.”

He seemed hardly to have heard her. “This is what I need. Usually ladies want to add watercolors and soften the lines, and that is worse than useless to a scientist. We prefer a plain, accurate representation.” He gestured to one of the books before him which was open to an engraving of several similar fossils.

“If it suits, then I am glad of it. Now, if you will excuse me, I must check on my sister.”

“Of course. I am sorry to have troubled you,” he said stiffly.

“It was no trouble. I will see you in the morning.” She was almost out the door when she heard his voice behind her.

He spoke stiffly. “If you would prefer to remain by Miss Bennet’s side tomorrow, I will certainly understand if our trip to the chalk pit must be postponed.”

Elizabeth hid a smile at the effort this polite declaration had clearly caused him. “Unless she takes a turn for the worse, I believe she can do without me for a few hours.” 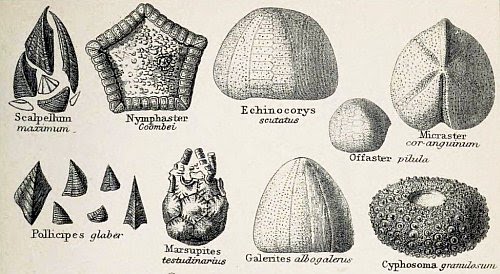 Well, what do you think? Will Darcy get in more trouble with his father over the chalk pit fossils or the impertinent country Miss?